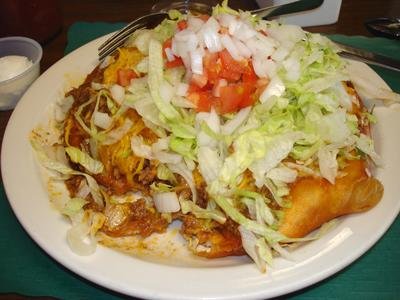 In this blog, you’ll learn about the food here at NEC. The catering staff that work here are often first nations people themselves so it makes it feel a bit more comfortable. What makes the food here unique is that it often has a first nation cuisine which isn’t offered at any other college. What I think about when it comes to NEC is the FOOD!!!!

I like having food at the cafeteria for several reasons. First and foremost, the catering staff makes the food taste like it’s homemade and has a home-like feel when you sit down to eat.  It’s a nice surprise to see what’s being served at lunch. The best thing at NEC is that the catering company serves some traditional foods and non-traditional food. I like having Indian tacos for any lunch or dinner meal. For myself, I like having the chili served on the side when I have Indian tacos.

Some other things on the menu include breakfast items such as a fried egg sandwitch, french toast, pancakes and porriage. There’s many other things that the kitchen offers like discounts for coffee. If you buy a certain amount coffee, you get one free which is pretty sweet.

The only downside to food at NEC is that there’s no lunch program so you have to bring in something like instant noodles or a can of soup. I’m not saying it’s a bad thing if you bring in any of those to eat, but it’s nice if you can have fried rice, Indian tacos or something else. Another thing is that the food can sometimes be expensive if you’re on a budget.  Food such as Indian Tacos or buttered chicken on rice can cost $5.25 a plate and soup with bannock can cost you $3.50. The menu price is decent compared to other places like resteraunts. The catering staff is great, they tend to smile alot and take time to have a quick chat with you. I had a nice chat with a chef who was a previous student here at NEC and now works in our kitchen.

In conclusion, the food at NEC is to be enjoyed while sitting at a table or by the fire. And on a cold day just sit in the lounge area and sip on a cup of tea while you laugh with your friends.

My name is Sheena and I am halfway through the first year of Aboriginal Tourism Operations at NEC. I’m really enjoying it so far, the content is relevant, the staff and students are respectful, and the atmosphere at the school is simply beyond compare. 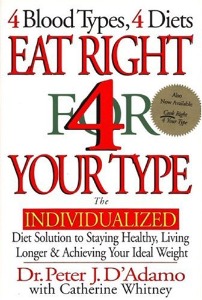 In the tourism industry, appearance is important, so I have started the Blood Type Diet for blood types O, in hopes to portray a healthy image. The blood type diet is a nutritional plan made famous by the book “Eat Right for Your Type.” It’s all about eating foods that are compatible with your blood type, for health and longevity.

If you’re anything like me, you’ve struggled to eat healthy, especially when pressed for time and faced with commitments like work or school.  This is my biggest dilemma, but I am finding ways to combat this issue and eat with my ancestor’s in mind, even in today’s fast paced times.  I am planning to share my favourite on-the-go recipes as well as my favourite quick and easy switches to the “Eat Right for Your Type” lifestyle.

So, if you’re blood type O and you’re interested in finding out what you can do to make a few simple changes towards a healthier you, take a look at my personal blog: http://wildflowerpetals.blogspot.com/ On there, I will have examples of what has worked for me, what hasn’t, what tasted good, what didn’t, detailed week-by-week meal plans, instructional videos and useful resources I’ve come across along the way. 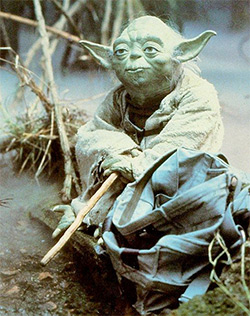 Why? Why not I respond! I deserve to continue to educate myself regardless of my age……everyone has that right. I must say though it is challenging to return to school where the average age is twenty something and I, well, I am a little more seasoned! Believe me it was an incredible risk I took to walk in those doors and be one of the oldest in my program but I am proud I did. My challenges may be somewhat different as I don’t have young children at home, I have a lot more life experience behind me, working my older more weathered brain in a different way, and my wrinkles are a little more pronounced. I do have to worry about making ends meet, rent and bills are paid, ensure there is enough food in the cupboard, studying, completing assignments, and attending classes.

So this brings me to the answer, my answer, as to why I want to go back to school and that is that I deserve a better future even though my retirement is closer than some of my peers. I want to wake up daily and be content with my career, to have a sustainable income, room for growth, and the opportunity to have my currently mostly dark brown hair turn white through the years I will have put into my job!

I don’t think a number should dictate whether a person should return to school, it should never stop anyone from pursuing their goals. As my grandmother always said, education is something no one can take away from you.  It opens doors, it provides you with a sense of accomplishment, and it helps to build your confidence.

Let’s face it, in today’s job market employers are looking for qualified employees, so with a good educational background you’re more likely to be hired. As much as I want to make my family proud of seeing me succeed at school, I want to make myself proud of this accomplishment. 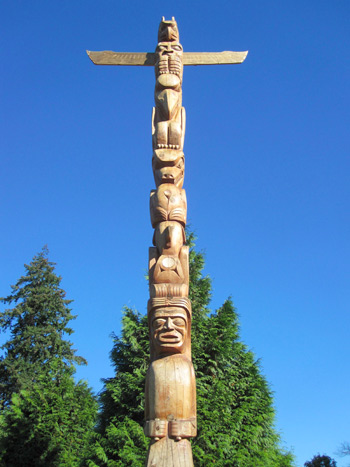 It is a beautiful sunny day in Vancouver, and our Aboriginal Tourism class is off to another wonderful field trip.  Today we are going to Stanley Park to learn about totem poles.  The outing is led by knowledgeable tour guide Gary Johnston, who we are lucky to have access to through the school. (Yes he works here at the college!)  I have become interested in learning more about the stories behind the poles, and also about the story of the pole at the college.

Aboriginal people carve cedar trees into poles to record history, to symbolize inherited rights and privileges or to interpret stories and events. For the most part, in the past, only a Chief or person of high rank in a band could commission a pole to be made.

Stanley Park got its first pole in 1903 as a gift, and has been adding poles ever since. More poles were added at Vancouver’s Golden Jubilee celebration in 1936, at the Centennial, and at Expo 86.  Renovations were done in 2006 and now there are many poles at the park representing cultures from all over the province, new interpretive signage, and a gift shop. 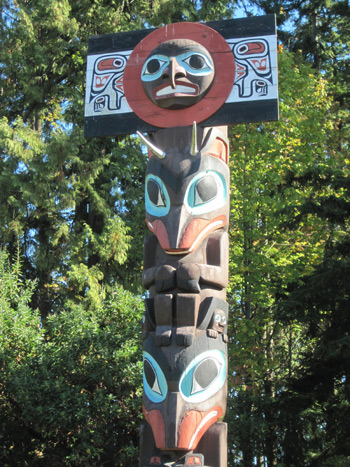 hard on the Totem Poles, and the poles do not stand up to the elements for too long. Many of the originals are now in museums, and replacement poles were commissioned and carved. The poles attract over 3 million people a year and are the # 1 tourist attraction in the Province.

All poles have a story legend or meaning behind the art. There are many kinds of poles for different occasions, or events. 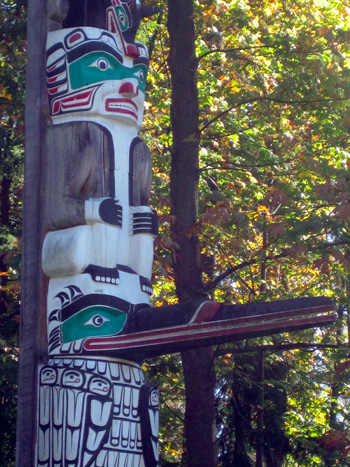 Some of the different types of poles:

– Interior House Posts: which held up the massive beams in a longhouse.

– Carved Planks: attached to the inside or outside of ceremonial dance houses.

–House Frontal Poles: or Portal poles, which served as doorways. (Like the pole at the college.)

–Mortuary Poles: which could hold the remains of a chief or a high ranking person in a cavity box at the top.

–Free Standing Memorial Poles: erected in the memory of a past chief.

–Grave figures: which were carved in memory of a deceased Chief or other carved spirit figures that were part of ceremonial life. 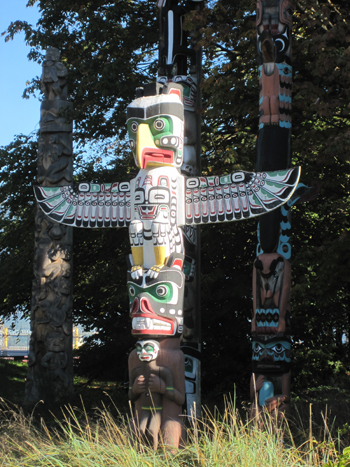 welcomed important guests arriving for a Potlatch or other feast.

–Shame Poles or Figures: To ridicule another Chief or family for improper behavior.

I hope you found this information of the totems interesting and that this encourages you to explore the meaning behind any Totems that you come across. If you are interested in the stories behind the poles at Stanley Park, there is a book you can buy in the school store called Totem Poles of Stanley Park by Vickie Jensen. There may not be a written record of some of the other poles around BC, but if you talk to elders in the communities where the poles are from, or find out who the artist is,  you may hear some wisdom that has been passed down verbally through many generations.